AT TODAY’S RACE I WON… AND YOU ALSO 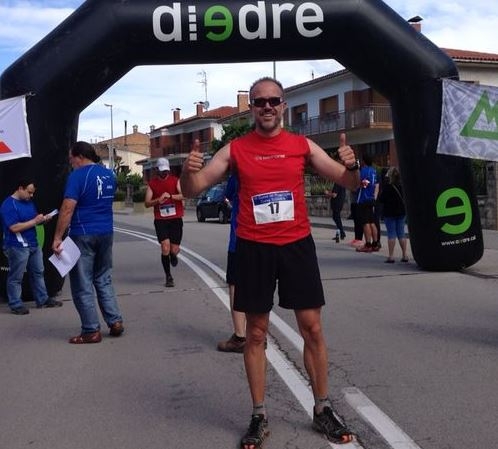 Of course (and unfortunately) I have not been the first, but due to the specific cause behind this race, crossing the finish line, I was aware that today I won, and you too … everyone won.

Today I raced in San Bartomeu del Grau (Barcelona) a 12Km running race, focused on the solidarity with the environment. Each participant, instead of receiving a T-Shirt ‘made in China’, was sponsoring a tree replanted in an area affected by fire, and also offsetting the CO2 emitted by the race itself.

There are already other solidarity sports events with a social cause, but very few that are focused directly to  the environment. It is the same with society in general, which is pretty supportive (though often little commitment) to social issues, but very little to environmental issues (perhaps because they require even more commitment and effort). All kind of solidarity is good, and any action is necessary. But I would say that we need much more involvement of everyone, at all levels, with the environmental challenge we face throughout the planet.

As much as we help a particular group (which we have to do, as there are many urgent and dramatic needs), there’s always a problem over which is already hurting, and will hurt a lot more in the future, to all people on the planet: environment. In the last 50/100 years we have destroyed and stressed the planet advancing rapidly and in a very dangerous way, as we had never done cumulatively and in absolute terms, since the beginning of humanity. We have little time to react and stop this threat, acting and reorienting our relationship with nature, is the greatest challenge for the humanity.

It is already happening, but it will be much more in the future, that environmental problems provoke all kinds of "social" problems:  Drought; extreme storms; problems with agriculture; deforestation; health problems from pollution or contaminated water; acidification of the seas; mass migrations due to bad weather; etc, etc, etc … These are examples of how it affects and will affect people, but the problem goes beyond humans, and greatly affects biodiversity and the natural balance of the entire system.

Fortunately, there is a growing awareness of this challenge that we must push from below, from citizenship to pressure above (governments, enterprises and institutions); and more and more initiatives at all levels in this regard. The race I did today is at a local/regional level, but there are other powerful campaigns worldwide, sustained by the strength of many people who give their support.

I’m participating in many of them, either by signing, either taking part, either making small contributions when I can. The most recent one has been the campaign "Save the Arctic" www.savethearctic.org, where we’re already more than 5,300,000 people who have signed for that key climate and biodiversity area in the world, in order to be classified as a global sanctuary. Now I have to find three influential people to join (one of the commitments to be choosen in this campaign). I also encourage you to participate, because we play a lot in the Arctic. The fact that the image of global warming is a polar bear on an Iceberg, do not have to confuse us and make us think that we do this to save the bears … hopefully it will let us save them, but also, and above all, what do it for us all.

I encourage all of you to participate any movement or initiative in order to face this huge challenge, and together compose a magnificent verb for a better future for us, for next generations, and for nature in general:

He (the planet) will win