ELECTRIC DAKAR: WHEN YOU WIN AND LOSE AT A TIME 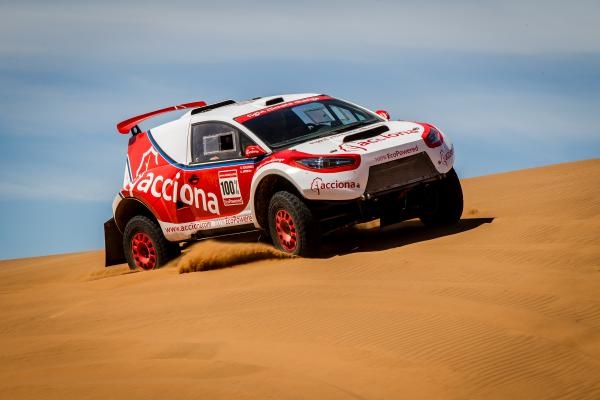 We don’t have to get confused with objectives and purposes.  Sometimes you can’t get the goal, but achieve the purpose;  losing in the first point, but earning much more in the second.  However, in the reverse case, we would have a small victory in front of a great defeat.

In 2013 we created and promoted the project to ride the Dakar Rally with a car without fuel.  Accompanied by Agustin Paya, it took us longer than a year to convince Acciona to bet for the project.  The road ahead was difficult because it was very innovative and very complex to manage for the short time we had and for the diversity of personalities, attitudes and technologies that were involved in the challenge.   But at the end we succeeded.  We were the first ever car 100% electric to start the Dakar and complete.  It was a success for the target achieved and the communication, but it was not a sport success;  but everyone who knows about racing, adventure and innovation, can understand that it’s not easy getting things right the first time, and that ecabling big challenges always means accepting a high level of risk.

Then they came the analyzes, reports, and, as always happens when things do not go quite right, they came too the experts on finding excuses and pass the blame to the neighbor.  But the good news is that in the end, Acciona decided to continue the project, evolve the vehicle learning from previous experience, and retry the  Dakar in order to look for the second chance of those who know that dreams are achieved after persevering and rising after falling.

And this week the new car makes a debut in the Morocco Rally, as a test and quality training to consider the big race to be held in January.  The bad news, at least for me, is that we have not agreed with the sponsor to be the driver in the Morocco race.  That’s the reason why I mean that I have lost this option, that it was still one of my goals, but instead I won on the purpose I had when we made the first brochure to present this project: create an adventure event for really promoting sustainable attitude towards the future in general, and efficient mobility and renewable energy in particular.

Obviously, I still think I’m the best driver to ride a Dakar with a car zero emissions that claims to be a global example for sustainable development: I have the necessary experience (9 Dakars), I have a broad racing and extreme adventures curriculum, I am trained in sustainability and truly committed to the environment, I can communicate in four languages and, the most important, I think I’m the only driver in the world with some recognition in motor racing, who has resigned voluntarily and publicly tu race cars with combustion engines.  For sure I will never again participate in the Dakar with a car that is not zero emisisones.  For me, the commitments that are related to values ​​require consistency and absolute authenticity,  not being only marketing activities dressed up as good intentions.  In a time of chatterboxes, magicians of advertising and liquid valors, we need people willing to walk on his words.

I hope that the sponsoring company will consider these assets and commitment, and we can agree for driving back the electric car in the next Dakar.  For me it is very important not only because I am passionate about adventures and I have interest on amortize the enormous effort put into this project; but above all because my priority is to promote and participate in projects that are truly focused on raising awareness and make environmentally responsible actions.

And if in the end it’s not possible, I just hope that the pilot driving the car, will not be only a driver, but will be a responsible driver and committed to all these values. Other than someone who only cares about his passion and fun, and does not care at all about the effects this can entail for the environment. Other than a driver who now he runs an ecological car because there is money on it, but tomorrow he will run one pollutant, because his priority is just racing and not the values ​​of sustainability.

If the success we all hope arrives reaching the finish line of Dakar, who will have been behind the wheel of that car, will become a global ambassador of a brand and a purpose that was really committed to making a better world, or  he will become an ambassador of another marketing campaign and personal enjoyment without authentic values.   It could happen that the sponsoring company won in the objective, but lost miserably in purpose.

Since we started this project, I always understood that all who participate in it, would have their particular interests, but must share a common higher purpose, because we are not here talking about sports, entertainment or having fun; here we are talking about responsible leadership and actions to provide a really positive impact for the future of our planet.

Therefore, whatever happens in the end with my participation in the team, I am winning, because I pushed a challenge that has continued, and because I am proud that a brand like Acciona is being brave and continues betting on this project and all its values.  Driving or not driving finally that car, I know perfectly which one is my favorite in both the Morocco Rally and the next Dakar Rally: The Acciona 100% Ecopowered .