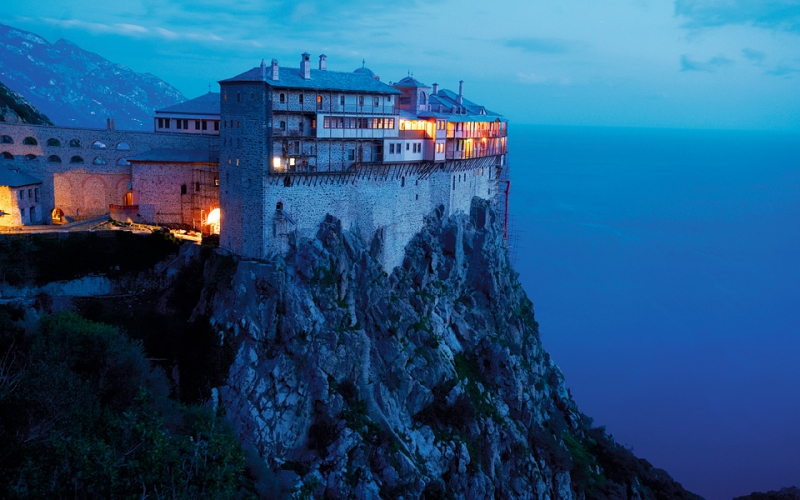 Next adventure: a running trip around Mt.Athos peninsula, one of the most special, unknown and authentic sites in Europe. A territory where only monks live, women cannot enter, and keeps the same reality for the last 1,000 years

I have long said (and practiced) that running is much more than doing organized and crowded races, where there is not uncertainty beyond your own capabilities. The races are very good, and bring the sport to many people in a very easy and funny way, but there are many other dimensions. And one of them, which I love, is the "Adventure Running", where the fact of running is the way of moving and not the goal.  This allows us to make light cruises, covering a much greater distance than walking, discovering very special places, away from the pressure and the massification of major sport events. I’ve done a lot of trips of this type during 2 to 10 days, and I suggest it to everyone. Perhaps our social environment will not appreciate it as if you were participating in an organized and famous challenge, but I assure you that on a personal level the impact and experience will be of an unbeatable quality for the lovers of running and the challenges in the nature.

And specifically, this Saturday I am ready to start one of those running trips that give full meaning to this exciting philosophy:

During 4 days we will run the entire territory of Mount Athos, a UNESCO World Heritage Site, where there are no villages, no restaurants, no television, no mobile signal, and nor anything that identifies our society. It is a small peninsula of northern Greece (335Km2), not accessible by road, which is considered the "Garden of God" by the Orthodox religion, and where there are only 20 monasteries inhabited by about 1,400 monks.

It is the only territory in the European Union that has special treatment and an autonomous status where the same rules and the same rights do not work. Nobody can freely enter there. An acceptance/invitation from the monk community is required, and a maximum of 100 Orthodox pilgrims and 10 unorthodox per day can enter; being able to be there only 3 nights. Non-Orthodox must make a request and wait to be accepted and invited for a specific date. Then, if you can enter, you do not have to pay anything, and you will be accommodated in the monasteries, where they will provide a free bed and two meals per day.

An important feature, which I don’t like, but it is just how it works, is that women cannot enter. From the beginning of the community, it was considered that avoidance of female presence was the best measure to ensure compliance with the vow of chastity of the monks. Amazing!… a place in Europe where women have not entered for a thousand years. There are only three documented cases of women in Athos: a small group of refugees during the Greek Civil War, a model who dressed herself as a sailor to get in, and an eccentric millionaire who went with her Yacht. After that, it was legislated (and accepted by the Greek parliament) to impose a penalty of up to 12 months in prison for infringing this rule. It is even forbidden to have women in the sea, less than 500 meters from the coast. But the thing does not stop there; Neither can enter females of any other animal species, to avoid temptations for those gentlemen with the mating scenes.

Another minor but significant curiosity for us is that until 11 years ago they could not enter Catalans on the peninsula. We were "non-grateful" people in the area, because in the 14th century some Catalan mercenaries looted it as revenge for the death of Roger de Flor by the Duchy of Athens. In 2005 the Catalan government made an act of redress, and the ban was annulled. I hope they do not hold us a grudge!

It really a very special place and it maintains a very interesting authenticity.  From any point of view it’s a merit that these monks were able to negotiate and enforce their status as de facto "monastic autonomous republic" with the Byzantine Empire, the Ottoman Empire, the Russian Tsars, the Serbian princes, the Nazis, the Greek state, The European Union, and even the Schengen Treaty.

During the trip we will have no connection of any kind, but I promise to make a nice chronicle of everything afterwards

You see what things can be done by running. I do not know if the mountain of Athos is sacred or not, but I assure you that the passion to make adventures and to know special places of our planet, is more and more sacred for me.