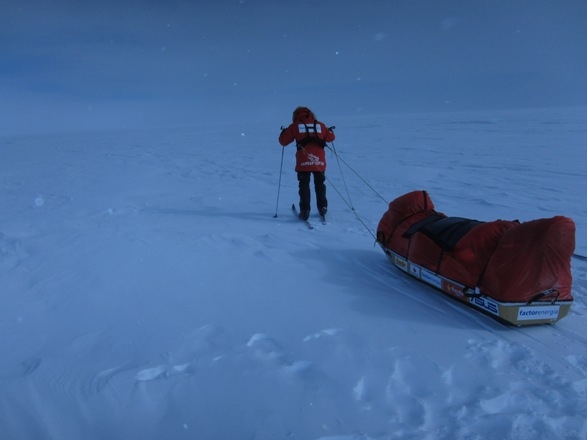 WE PRESENT A NEW ADVENTURE FROM THE "WORLD NATURE EXPLORING" PROJECT, FOCUSED ON THE EFFECTS OF CLIMATE CHANGE ON THE ARCTIC ICE PLATE AND ITS CONSEQUENCES FOR THE WORLD.

Always aiming to discover a deeper look at the natural environment where the adventure will take place, communicating and raising awareness of the natural habitat and its relation to human activity, Albert Bosch faces a new challenge in the Arctic Circle, which will bring him to cross the gulf of Botnia, at the Baltic Sea between Finland and Sweden.

Accompanied by Pako Crestas and Pepe Ivars, they will start next Sunday February 26th of the Finnish port of Oulu, to cross over the frozen sea to the port of Kemi or Nikkala, according to the ice conditions. The trip will be in full autonomy, using a Cross Country skis and pulling a sled with all the necessary material; Making between 120 and 150 km, depending of the final possible route. In total it will take between 6 and 7 days of travel (four in the deep sea), and once in the sea they will have to endure temperatures between the 20 and 40 negative Celsius degrees.

This new challenge of the WORLD NATURE EXPLORING project will use the adventure to share in first person the situation of the Arctic ice, its rapid decline due to climate change, and the effects that this has on both the fauna of the area and our society.

A polar sea crossing of this type could be made in a straight line about 10/15 years ago, but now the thickness of the ice sheet is much weaker, and it is necessary to design well the route to choose the parts where the surface is more solid and avoid places where it is below 10-15 centimeters thick. For this reason, in the last years different information services of the state of the ice have come out, similar to those that we have in our latitude to make forecasts on the weather and conditions of snow in the mountain, or the state of the sea.

WORLD NATURE is an independent, non-profit organization dedicated to nature conservation and dissemination, education and environmental awareness. It works in a positive and constructive way, involving people, companies and public administrations in demonstrative projects on the field.

From next Sunday 26 February, we enter a new adventure "World Nature Exploring" … you can follow through this website and the different social networks of the foundation World Nature and the adventurer Albert Bosch.