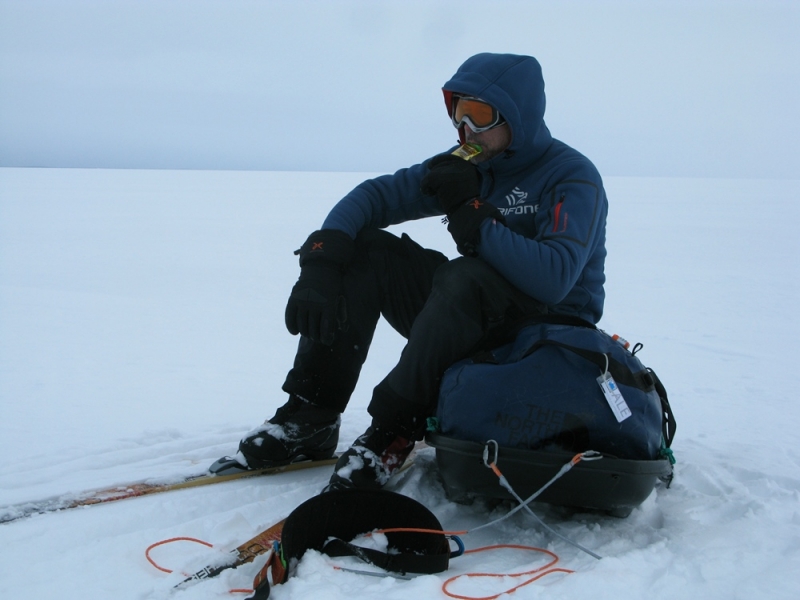 FINISHED THE CROSSING OF THE GULF OF BOTNIA (BALTIC SEA)

In the end they have only been 4 stages, but they have been very intense and the last two, especially hard.

Initially, we had planned to go from Oulu (Finland) to Nikkala in Sweden; but right on the border there is a line where an icebreaker passes at this time, and it was impossible to cross. Therefore, in the end we had to enter earlier to the coast, ending in Kemi (also in Finland)

The first two stages were not too tough according to the hours and distances traveled, due to different loss of time caused for logistical reasons or planning errors. Then we had to push hard in the third stage in order to recover the expected average distance, and also because we had the objective to reach an island where we knew that there was a hut, and we preferred to avoid the tent, which was too small and uncomfortable for three people.

That day I beat my record of kilometers in a polar stage: 42Km in a total of 12 hours and a half skiing with about 40 accumulated minutes of rest. My problem was that I was wrong with the boots chosen, and my feet hurt a lot.  I took it as a mental training for future expeditions, because in these projects, when not being able to abandon when you are on the journey, it is better to take advantage to train your mind in this suffering situations.

This third night we recovered very well in a cabin where there was firewood, and we made a good fire and a good talk while we ate and rested from an long day. The next day we were full of energy to do the last stage. And we needed it all (the energy), because it was snowing all night, and continued to snow during the route, and this caused the ice to be covered by a thick layer of snow that made it very difficult for us to go ahead. In addition, except for the wind, it was not too cold, and the snow was extremely wet, hooking on the base of the skis, and multiplying the difficulty. Total, about nine hours of stage that left us crushed.

I have made longer and much less harsh traverses than this one. You can never underestimate any challenge, as each adventure has its difficulty and does not allow you to relax or rely on excess.

This trip is excellent for anyone who wants to do a real test of what a powerful polar expedition means. It allows you to enjoy the immensity of the Arctic landscape, the great distances and the hardness to live on the ice, but doing it in a few days and in more pleasant conditions than when you are all isolated from the civilization.

Apart from knowing a new corner of this planet, and aside from enjoying like an child of this adventure, one of the prizes of this project has been the good atmosphere and coordination that we have had with the companions. Pako Crestas and Pepe Ivars are great, and as you can imagine, this journey has helped us decide to do another project together, in which we will start working very soon.

Finally, I would especially like to thank Alex Simón i Casanovas, who is responsible for “Polarguide & Logistics “, with a permanent base in Rovaniemi, and I would advise him to you for any logistical needs you may have over there for your adventure or tourist activities.

This is good to make a joke, but the truth is that when one see and experiences serious environmental problems, he realizes that what happens in one place in the world, never stays only in that place. And specifically, what happens in the Arctic with the consequences of an extremely accelerated climate change, do not remain only in the Arctic.

Perhaps we should stop using the image of an isolated and desperate polar bear on a drifting Iceberg, to begin connecting climate change with images closer to us.  It seems that we are in a way, that while we are not directly affected for a problem, we prefer to talk about it and look like we are good people by intentions, but in return we do not incorporate any real change of attitude.  Giving a few euros for hungry children, or for a campaign to save an endangered animal, is absolutely necessary, but it is the easiest and least efficient of all we can do.   And in fact, many people with a little economic help (necessary but insufficient) already believe that he has earned the title of good person.  But if you have to act, spend time, give up or change habits to save millions of children from hunger, or countless animal and plant species of the earth, does not move a finger.

Sea level rise worldwide; changes in global atmospheric circulation patterns; reduction of the phytoplankton that is the base of the trophic chain of the majority of marine species and, for that, of the humans; etc, etc, etc ….

Excuse me if I mess up with these reflections, but I think that all of us who love this planet in its biological diversity, and all of us who love humanity in itself, we cannot put this objective and realistic information under the rug to adapt to an ignorance or cynicism that allows us to be happy with a welfare based on selfishness.

I consider myself a great optimist, and I think we are still in time to solve all or a large part of the problem.  But I am convinced that an optimist is not the one who sees everything positive… this is an innocent.  An optimist is the one who recognizes the problems and the negative parts of a reality, believes that it is worth fighting and relies on our chances of success.

The purpose of the project WORLD NATURE EXPLORING where this traverse is included, and also the others adventures I am doing, is the double goal to be ambassadors of nature and sustainability, and helping to inform and spread this values from the activities we do.

To those who follow my chronicles and, above all, those who are brave enough to get here, thank you for doing so and thank you for sharing a small or a large part of this vision, concern, optimism and commitment of what our individual actions mean for the he global balance of the planet on which we all live.