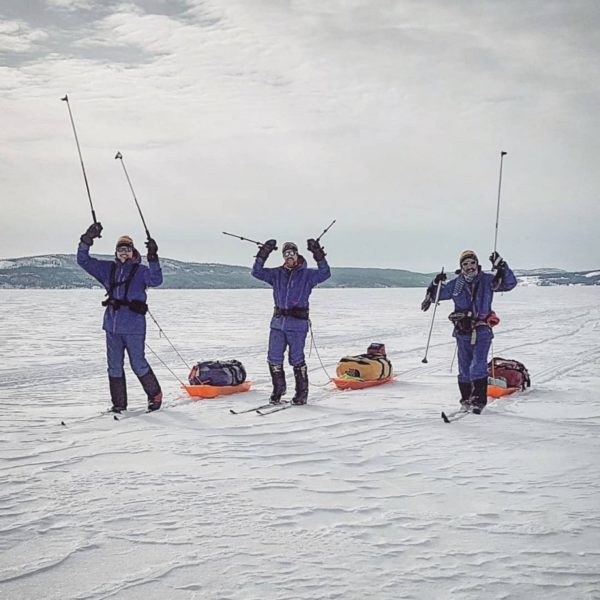 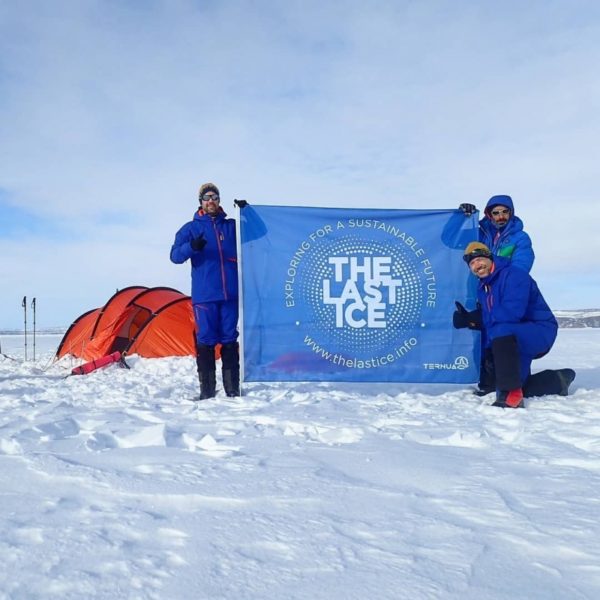 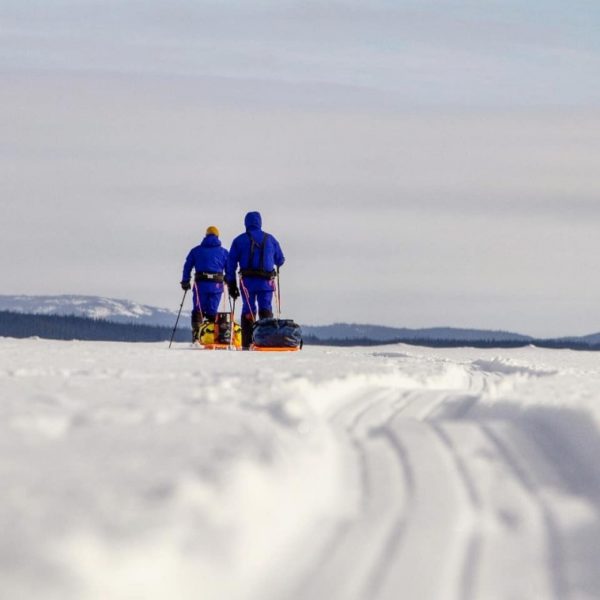 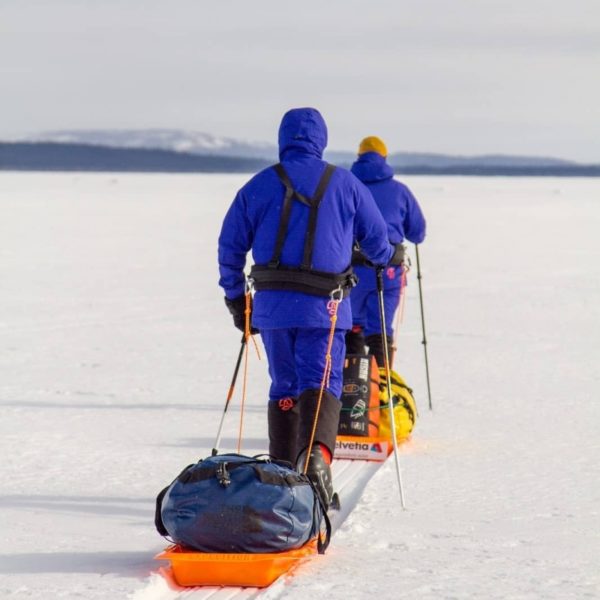 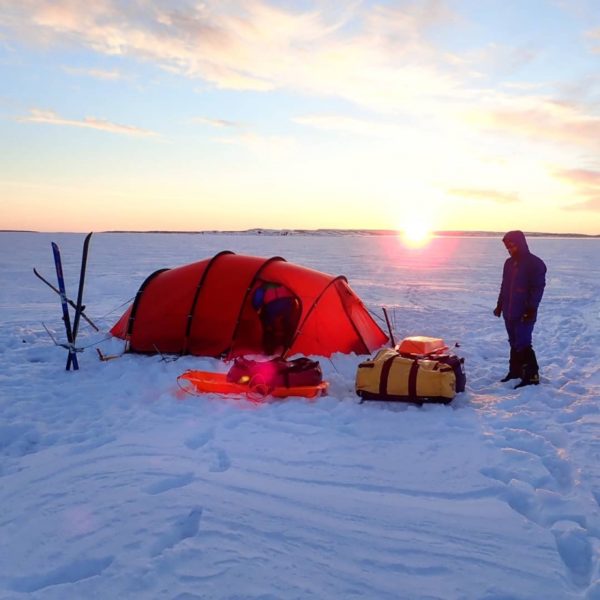 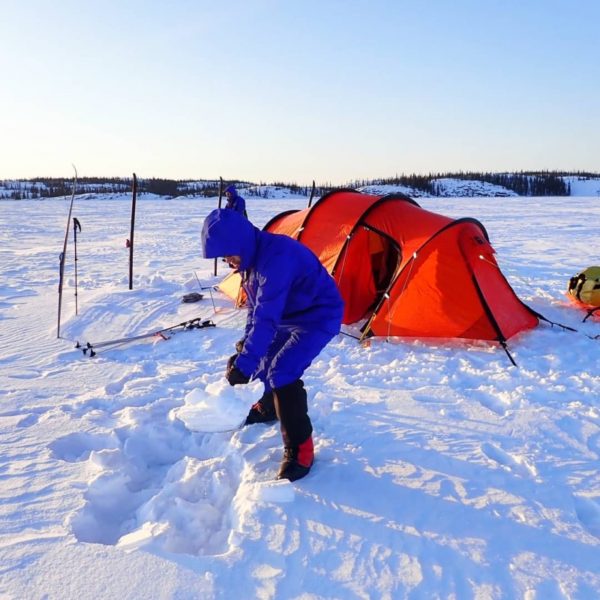 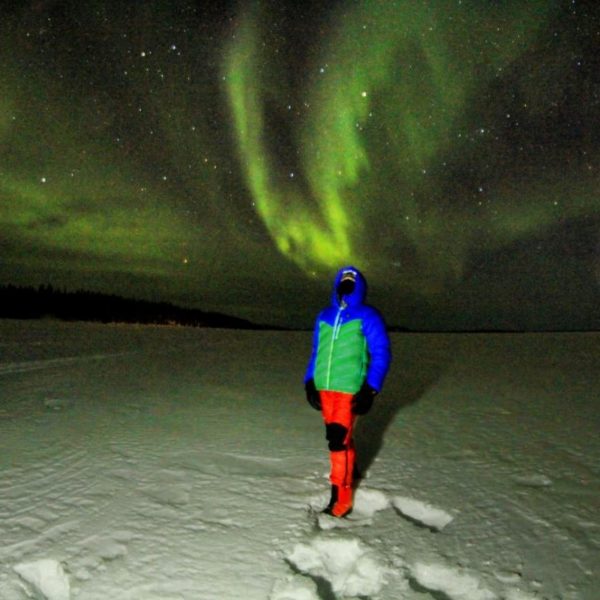 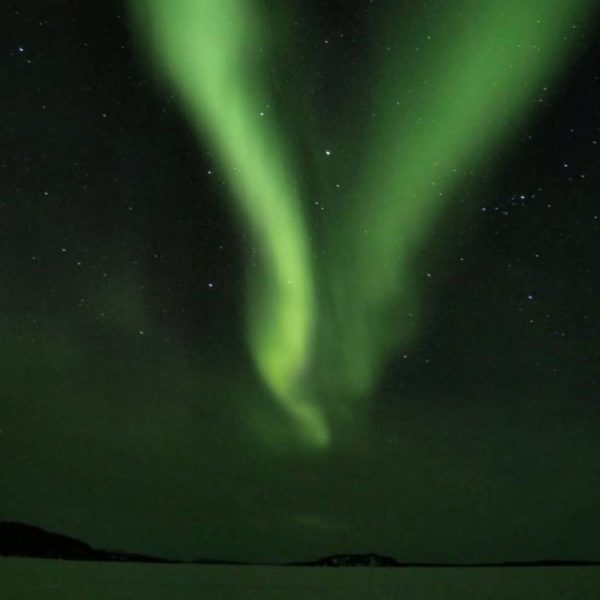 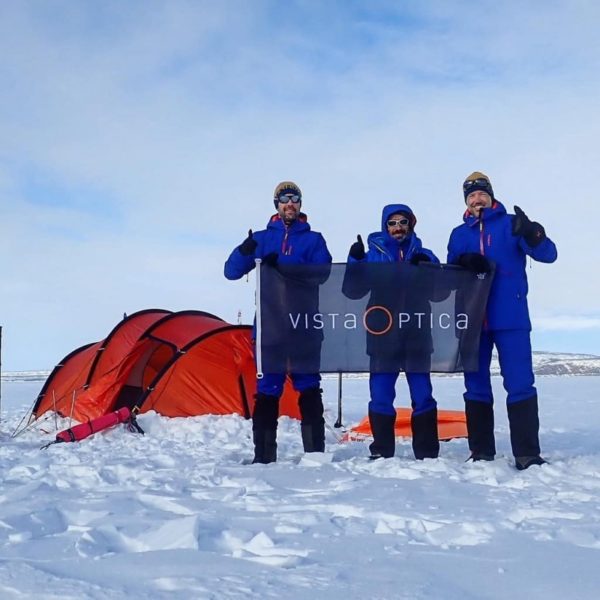 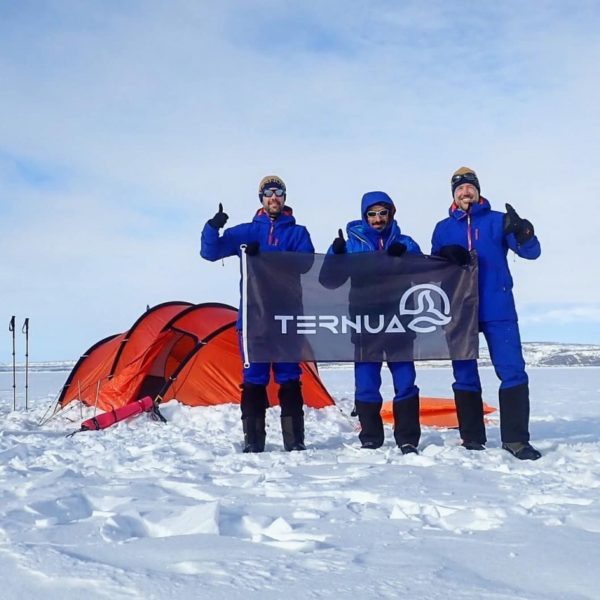 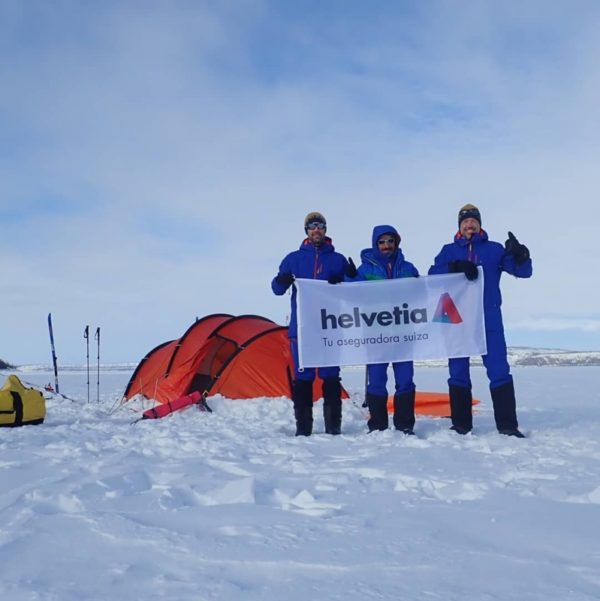 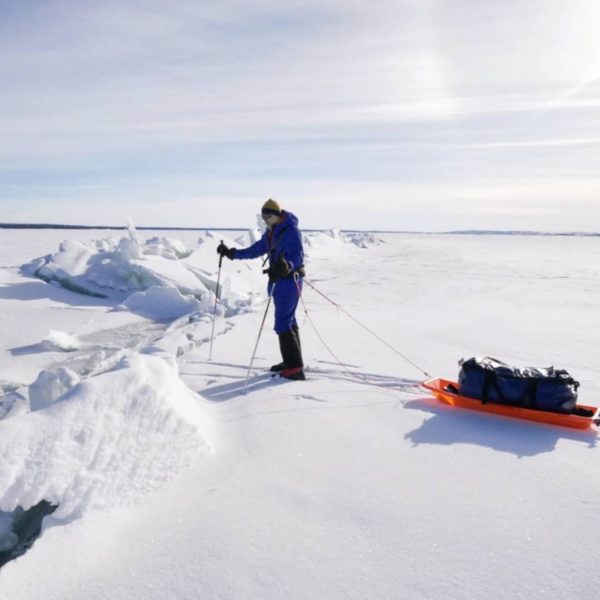 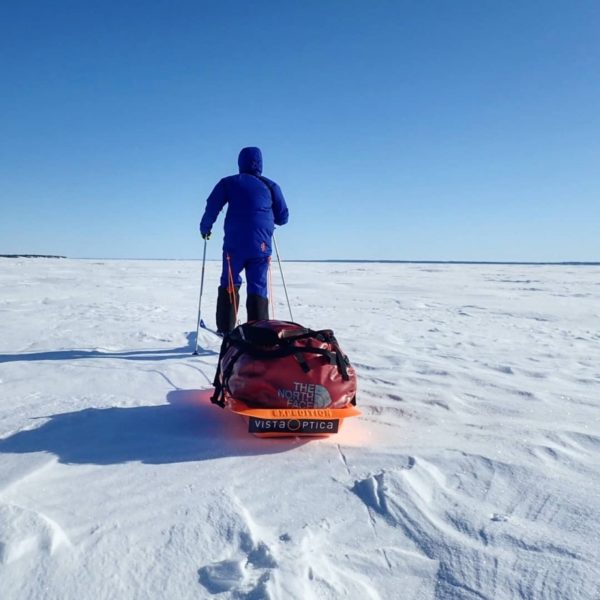 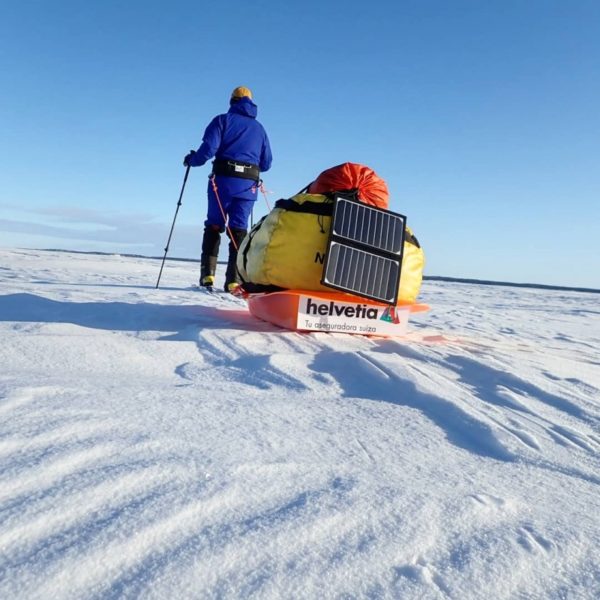 We have completed 170Km in 7 stages, in total self sufficiency, with temperatures between -10 and -35ºC, crossing all the east arm of the lake, from Yellowknife (Gross Cap) to Lutsle K’e, starting on Sunday march 11th and ending on Saturday the 17th.

Lutsle K’e is a site located in the reserve of the indigenous Dene, located 240 km from the first road or connected city, and is only accessible by plane, by snowmobile in winter or by boat in summer.

This was the first of the Arctic expeditions planned in the THE LAST ICE project that we will do with Pepe Ivars and Pako Crestas, that will bring us to cross different frozen lakes and oceanic areas of the different continents limiting the arctic.  We have planned also Onega Lake (in the Russian European arctic zone), the Baikal Lake (in the Russian Asiatic arctic zone), and the North Pole.

The entire journey was made within the indigenous reserves of the Dene people, in northwest Canada territories, leaving from its capital Yellowknife (specifically from Gross Cap), to ski all the east arm of the lake and reach Lutsle K’e, one of the most symbolic points for this tribe, which is totally isolated by ground transportation from the rest of the civilization. Yellowknife is one of the coldest inhabited regions of the planet, along with some regions of Siberia.

The expedition was developed in optimal conditions of ice and weather, getting the project completed in the minimum number of days, which had been estimated between 7 and 10 days. In fact, the weather found was much better than would be usual in this latitude for this time of year, and only one of the days presented extreme conditions of extreme cold and wind thay nearl had to stop the normal march and have to take refuge in the store; but in the end it was possible to realize in its totality, without delaying at all the average of daily kilometers, that was located between 20 and 30 per day. The state of the ice in the lake was very good, without too much snow that would have made walking much more difficult. In the 7 days only five delicate points were found in the formation of the ice, with important pressure lines that had to be overcome by making small detours and choosing the right step so as not to take risks in the breakage of the ice and in the passage of the blocks accumulated in the pressure line.

The individual trajectory of each one of the expedition members, together with their own experience as a team accumulated during the crossing of the Baltic Sea carried out in 2017, made the common work very efficient both in the personal understanding, in the physical preparation and in the necessary technical material used.

Each day consisted of aroung 9 hours of skiing with about 3 or 4 breaks to rest and recharge energy. The temperatures during the day could oscillate between -30ºC/-35ºC to first or last hours of the day, until -10ºC during the central hours. The temperature inside the tent during the night reached -20ºC, so it is worth noting that one of the hardest parts of this type of journeys is to live totally autonomous and in a tent, in such extreme conditions for so many days. In these adventures, the physical/sport performance is as important as the psychological/mental performance, given the harshness of the conditions and the monotony of the daily march.

These large spaces almost pristine and very remote provide a very special view of the natural environment, because one feels really humble before so much immensity and strength of nature, and has no choice but to adapt and learn to enjoy how much it brings and how special that territory is, to compensate for the physical and mental hardness of the adventure. Enjoying nights with skies full of stars and northern lights with absence of any kind of light pollution; sleeping on the ice in points where one knows that the depth of the lake reaches 600 meters; hearing the crunching of the ice under your head when you are sleeping with your ear pressed to the ground; or enjoying the immense views in a place without any human in hundreds of kilometers around, are some of the unique sensations that one has been able to experience in this expedition.

Apart from the more phisical and sport side of this expedition, there has been a very special opportunity to live with one of the most ancestral and remote peoples of all North America: the Dene. We have shared different visions of the world and of their own habitat and system of life within this same community: on the one hand that of the Dene inhabitants in Yellowknife, totally connected with civilization; and on the other that of those who lived in the remote enclave of Lutsle K’e, 240Km northwest of the capital and any point connected by land transport.

With them, it has been possible to discuss how climate change, development and the accelerated changes of western society affect them, in relation to a very traditional type of life rooted in a very pristine but also very vulnerable territory.

Clearly, Climate Change has effects directly observable in their day to day. For them it is not a theoretical discussion, because they see, for example, how it affects their way of transporting by the lake to move and connect with other towns or to hunt and fish, since the lake takes longer to freeze and there is a long period among which neither snowmobiles nor boats can use. It also affects them in hunting, since their main hunting and feeding object, the Caribú, are moving much further north since the 90s due to the progressive increases in average temperatures, complicating much more a life habit key to their subsistence.

All this leads them to be very vulnerable in terms of their social organization and the management of their territory, because having more difficulties in managing their mobility and ability to obtain food in the form of hunting and fishing, makes them much more dependent of the already developed society; and then development directly comes into play in the form of mining companies that are expanding throughout the territory to exploit their enormous wealth in different minerals (especially diamonds), which can easily “buy” their support or collaboration for their growth, making small investments in their communities.

In the documentary that we will make of this expedition we will deal more broadly with this question, but precisely the meaning of this adventure, apart from being a very special sport-adventure experience, is connected with making known the beauty and singularity of these pure places, that at the same time they are tremendously vulnerable to environmental problems and the consequences of the Western system’s own development. Our modest purpose is to act as ambassadors of these territories so that these expeditions serve to reflect and spread an awareness of protection against these natural environments that are part of a key balance for biodiversity and environmental and social well-being in that particular environment and in all the planet.

In the coming months the documentary of this expedition and the related social and environmental issues will be published, directed and produced by Íñigo Chalezquer with the collaboration in the script and content of Carolina Jara-Huergo.

The next expedition of the The Last Ice project will take place at the end of February 2019, with the crossing of Lake Onega.

Thanks to all those who have followed and made this adventure possible, and especially to our sponsors TERNUA, HELVETIA SEGUROS and VISTA OPTICA.